skip to main | skip to sidebar

On Salts - by Robert Huddleston 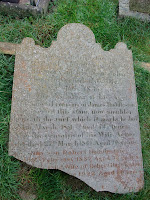 Here's a poem entitled On Salts by Robert Huddleston (1814-1887) the Bard of Moneyrea. Moneyrea is a village between Comber, Ballygowan and Carryduff which had (and still has) only one (Unitarian) church. The locals used to say:
Moneyrea, sweet and civil,
Yin God and nee divil.
Robert Huddleston was a farmer, gunsmith, lyricist, poet and prose writer. Of all the Ulster-Scots poets, he was probably the most prolific. As well as his two published volumes of poetry and songs (1844 and 1846) there is a large collection of unpublished work. Huddleston was so disillusioned by the poor response to these books that he did not publish any more poetry during the last 40 years of his life. Instead, he concentrated his literary efforts on a novel (The Adventures Of Hughy Funny) but was unable to find anyone willing to publish this. Huddleston is buried in Moneyrea Unitarian church graveyard. Unfortunately, his family headstone (pictured above) has broken and the main part is now lying on the grass. It would be great to see this repaired and some kind of memorial erected celebrating Huddleston's literary work.
About the poem, Huddleston wrote, "To be original is a rare feature in composition. The origin of Salts and that which brought it before the public, was the borrowing of a physic from a friend, to the benefit of a sick heart, to whom the postscript refers."
ON SALTS

Be honest, men, nor play the rogue,
Nae mair e'en bruise the snake or toad;
(An' for their hearts bluid to corrode,)
Or poisonous smalts:
Stan' teughly tae the healin' trade,
An' order Salts.

yeir this drug rid, the tither blue,
An' white an' green, an' yellow too;
An' then yeir drawers a motled vow!
Wi' cunnin' names;
But cannie notes the sleekit crew,
Wi' a' yeir schemes.

But this the plan ye tak' tae sell,
Tae feast the e'e an' please the smell;
A dose yei'd gie's tae mak us weel,
Just, just, for thruppence!
But haud ye there, Salts bans yeir skill,
We're weel for ha'pense.

Salts thou for me, and I for you,
Henceforth I hae a frien' that's true;
Ye'll dine but spare, an' never fu',
Ye paukie scroy,
Dae ye intend that chaps like me,
Yeir brew sud buy!

Ah! what disease wad Salts no cure?
They'd near pit by th' allotted hour;
Tho' feeble nerves, an' blood sae frore,
Wi' filth a rustin' --
Tho' dim we shine; sae clean they scour,
We 'gain do glisten.

Us poets, poor discernin' buddies,
Are aft annoy'd amid our studies;
By ane sae vile, the plague o' caddies,
Ca'd Indigestion: --
Salts are the boys that cleans the haggish,
An' tooms the brustin'.

Whan big my Lord he eats ower much,
Or's got a stappin' in his britch;
Ower roast beef, mutton, wine, or such,
O, thou art physic:
Sweet Salts, thou soon relieves the catch
An' reds the hash o't.

A wee bit ower, an' time tae trickle,
Oh! hear his tripes as rum'lin' keckle;
Away it goes wi' row't an' rattle,
An' rainbow thun'er;
An' tooms the brute - losh! losh! how muckle,
O' perfect scunner.

Whan toddlin' weanies tak' the dwam,
The cheapest Doctor's aye at han';
Just kilt their coaties up them roun,
Nor fear the ail:
But pour the potient liquid doon,
An' soon they're hale.

Wae worth the silly worthless dug,
Wha wadna raise his voice to laud --
A prey to sorrow, worm, or grub,
Salts thou'rt the devil
That tans the reptiles, fegs the lad
Free's us o' evil.

Wee baby-ba, the womb whan 'scapes,
What, what, preserves it frae th' pox?
Let mother matron 'mid her jokes
Now lagh an' say --
How aft she scour'd it 'mang the crocks,
Tae keep it free.

Out a' night wi' his w--s an' jades,
An' rantin wi' his jolly vagues;
Poor drunken Will a' torn in rags,
An' new gat hame;
O, Salts! how mony earthly plagues
Thou keep'st frae him.

For mental, weel as bod'ly ill,
Salts, Salts! the dose 'fore drap or pill --
Per this drug, that drug, Mr. Phill,
Yon glype sae buxsom;
The noblest med'cine in your hall,
Gie him the Epsom.

As suitin' best the silly scarum,
Wham lust an' laziness is at war in:
An' too, yon lass wham pride's devo'rin',
'Thout sense sae fumbled;
Her wi' the souple ---- e'en charm,
An' faith she's humbled.

The rigid bigot in his cause,
Despisin' every others laws;
I carna tho' o' priestcraft's braws,
I swear 'twere better
'Fore let him preach his cursed flaws,
He had the -----

Of Salt's power at reason spier,
I've mark an' but a sample here,
An' what need we for waste our lear,
Or bebble more o't!
We cudna sing their charms 'n a year,
An' set us for it.

Ilk man an' maid wha health reveres,
Nor care a fig wha at you sneers,
Come join the corps like flinty fiers,
An' stoutly back us.
Hurrae for Salts! let's gie three cheers,
An' guid black pretaes.

Ye'd thocht ae time my guts war churnin',
Anither time I was a' barmin';
A third, a rotin ill I's turnin',
Sae rude in manner:
While growl'd the win' like Mons Meg stormin,
Or distant thunder.

But ower my thrap a wee bit doon,
A wee drap drink my drouth tae droon;
Och, whishu! Care struck up her tune,
Ye may gie't credence;
Savin' yeir present, at the grun'
I got a redence.

Newton_Lass
Newtownards, County Down, Northern Ireland, United Kingdom
A'm a lass boarn an rared in Newton - that's Newtownards, County Down, Northern Ireland. I'm happily married with a wee baby daughter and we live with our menagerie of dogs and cats in a 200+ year-old cottage, which we've been slowly renovating and refurbishing for years. I come from a musical family, have been learning to play traditonal fiddle for a few years and am a member of a wee group called Keep 'Er Lit. Other interests include the Ulster-Scots language, history, music, culture and identity, creative writing, genealogy and local history

Poems And Songs By Other People

Links To Sites You May Find Interesting